SmartPeep has a mission to provide better elderly care with AI, by offering virtual elderly-sitter systems to help caregivers to monitor and respond better to older adults who are at risk, and who need help. They aim to penetrate the huge aging population market in Asia in the next 5 years. The company was co-founded in Oct 2017 by a machine-learning and pattern recognition specialist, a mobile software developer, a product, sales & marketing person, and a camera hardware expert. The team has grown to over 10 members now.

SmartPeep has received several awards in Singapore and Malaysia, and has been covered by media including The Edge Singapore, Oriental Daily News Malaysia, and KrAsia. SmartPeep has secured more than US$400,000 funds from accelerator and angel investors. 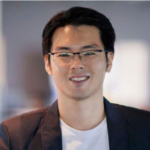 MOHAD HAZMI MANSOR – Malaysia
Assistant Director,
JETRO KualaLumpur
SmartPeep company, introduced a solution that ‘kill two birds with one stone’. The virtual AI patient-sitter system not only observes elderly safety, but as well provides caretaker the ease of monitoring their patients even when they are away.

Without additional equipment, the AI software leverages facilities’ existing CCTV and client can just plug in SmartPeep servers into the camera system. Everything will be converted into an intelligent fall detection device without the needs of equipment upgrade. In comparison with conventional bed sensor, the system supports multi-bed monitoring using a camera within the same room, which is catered for nursing home and hospital needs. The patients not needed to wear uncomfortable device on their body, as wearable accessories might give problems especially to elderly people.

The company is putting Japan their number one target country, as the aging population would be huge market for them to be in. They have signed a MoU with a Japanese company few month back, to explore the possibility of bringing fall detection technology into Japan home. Japan’s camera manufacturers also would be their potential future partner, as they have plan to integrate the software into cameras and scale out to general consumers.