With a population of 90 million, 54% of whom are under the age of 30, Vietnam has been recognized as a burgeoning startup ecosystem with a highly entrepreneurial spirit and an enthusiasm for technology. In recent years, Vietnam has witnessed a sharp rise in startups establishment and investment and entrepreneurship has slowly merged as a key driver for Vietnam’s economy. Deputy Prime Minister Vuong Dinh Hue also affirmed that Vietnamese policy makers are embracing an ambitious plan to turn the country into a start-up nation, targeting one million start-ups by 2020.

Specifically, 2016 has been declared as “the year of startups” with around 110.000 businesses registered. According to “Social and Economic Situation” reports issued by the General Statistics Office of Vietnam, there have been 39,580 new startups in the first four months of 2017, increasing 14% over the same period of 2016[1]. The fastest growing areas of startups include information technology, tourism services and food. With an internet penetration of over 37 million people, technology has been proved as the emerging startups sectors in Vietnam with more than 3000 startups active and 1000+ coming online every year[2].

In the “Social and Economic Situation” report, it has been shown that a large investment has been poured into Vietnamese startup companies. Aggregate capital registered in 2017 is approximately US$ 17 billion, an increase of 54 percent compared to the first quarter of 2016. Vietnamese startups has been received investments not only from local but also foreign investors, in which UTC Investments, Standard Chartered PE, Goldman Sachs, and NTT Data were the leading venture capitalists in 2016. In 2016, Vietnam saw a spike in startup deals, valued at $205 million, up by almost 46% as compared to $137 million in 2015. Fintech, amongst other sectors, has proved to be the most emerging sector with total value of Fintech startup deals in Vietnam of 129 millions, representing 63% of the total start-up sales[3].

With an ambition to turn the country into a start-up nation in the next four years, the Vietnamese government has approved “The National Program to support innovative Startup Ecosystem in Vietnam by the year 2025” aimed at paving the way for a boom in startups. The Project aims at accomplishing the following objectives by 2025: will have already completed main legal framework for startup ecosystem; Run the Online Portal for the National Innovative Startup Ecosystem; Supported approximately 800 startup projects, 200 startup enterprises, of which 50 successfully raised follow on investment from private venture investors or undergone mergers and acquisitions, with total value of about 1,000 billion VND (about 50 mil USD). It can be seen that the objectives of the Project are not only the quantity of startups beings supported but also the follow-on investment that they are able to raise from private investors and the society. With the Government’s involvement and great efforts from entrepreneurs, Vietnam has potential to build a healthy and sustainable startup ecosystem to become the “startup nation” in the up-coming years.

In the flourishing stage of education start up in Vietnam, Monkey Junior is an outstanding startup in educational mobile solution for children up to 10.

The founder Hoang Dao Xuan, a software engineer and graduate of the University of Technology, Sydney officially developed the Monkey Junior app in 2014 with the strong passion for helping children achieve educational excellence.

The learn-to-read program is designed as a system of effective and comprehensive lessons with a total of over 1,000 lessons per language, applying learning methods proven by the world’s leading experts in the field of early childhood education. Monkey Junior targets global users so the languages taught in the program are the most common ones around the world. Currently, the courses in American English, British, Vietnamese, French, Spanish and Chinese have been released.

Monkey Junior stands out in the sea of educational apps by teaching children languages the way they naturally acquire. As clearly explained in its website, the program uses the two most effective and proven methods to teach children how to read: the phonics method and the whole-word method. The English curriculum is divided into three different reading levels: easy, medium and advanced, guiding the little readers to learn from individual word and phrases (2,000 categorized words) to complete sentences (3,000 sentences) along with a wide range of 210 phonics rules.

The reading program uses sight, sound and touch to keep little learners engaged in the whole lesson. Monkey Junior provides a multimedia library with 6000 images, 2000 interactive videos and 10,000 audio files that are used to illustrate the words and the sentences. Children will enjoy completely tailored reading games at the end of each lesson that they can play and learn to read at their own pace.

Not only does the kid improve his reading skills and his pronunciation, he will be enriched with encyclopedic knowledge. The reading program covers 30 most popular reading topics for kids ranging from basic ones such as things at home, body parts, actions to advanced ones such as wild animals, occupations and science. Each day the child can go through one or more lessons, at 5-7 minutes each. The parents do not need to plan and prepare learning content. All lesson content has been prepared and organized by experts under the program.

The first version of Monkey Junior was released in late 2014 on iOS, Android and Amazon stores and the number of users has dramatically increased to over 3,000,000 by December 2017 with 3,500 daily downloads. Monkey Junior becomes #1 popular learn to read program on both iOS and Android and one of the 10 most downloaded and purchased educational apps in many countries such as Vietnam (#1), Singapore (#1), Canada (#3), USA (#20), etc.

In 2016, Monkey Junior won the Global Entrepreneurship Summit GIST (Global Innovation through Science and Technology) Tech-I-Pitch Competition in Palo Alto, California. The judges chose Monkey Junior from over 1000 entrepreneurs globally thanks to the app’s potential to bring reading skills to millions of children.

Recently, Monkey Junior has just received Google Start-up financial support funding of USD 100,000. This startup is Vietnam’s only representative selected for this fund among 24 other projects and businesses from 14 countries.

Hoang noted that he and his colleagues have been expanding its capabilities not only into fields of language learning but also other subjects as Math and Science. 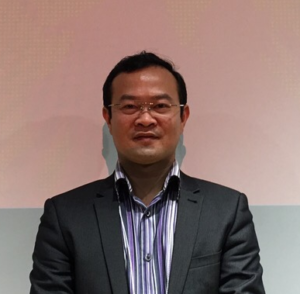 Le Thai Phong is a lecturer, PhD, Associate Professor and also Dean of Faculty of Business Administration, Foreign Trade University, Vietnam. Phong gained his Bachelor in International Economics, Foreign Trade University, and MBA from The University of Wales, UK. Since he dedicates to teaching, he came to Leeds University Business School to complete his PhD in international business, with the research title of “The role of intra- and inter-industry FDI spillovers in explaining performance outcomes: Evidence from the UK”. Phong offers few courses in business and management, such as strategic management, international business, quality management, principles of management, and leadership and management. He is the author of 35 articles, and the referee of serveral journals, domestically and internationally. Le Thai Phong is keen on bringing real world practies to the academic world, bridging the gap between theory and business practices. As consequence, he acts as a consultant, helping firms in improving their performance.