Aware Group was incorporated as a Data and AI company in September 2016. The company bootstrapped from the beginning using services revenue to grow the team and provide funds for developing products. There are now over 20 staff in New Zealand with teams growing in the United States and Singapore.

Aware Group has created deep ties with industry partners such as Microsoft (at the global level), to gain access to large customers across the world. These networks are especially important for Aware Group to understand the industry, but also to build a channel to sell products. Aware Group released its first Software-as-a-Service product, Aware Cognitive Platform (ACP) in 2019 and these networks have been invaluable.

ACP enables customers to rapidly deploy and realise the value of AI in their business. Aware Group have built several ACP Modules to support customer scenarios including (but not limited to) People Counting, Automated Number Plate Recognition and Audio Classification. Aware Group have run a number of pilots of the technology and are going through commercials for production deployments right now. 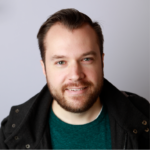 MIKE HANNA – New Zealand
Investment Manager,
New Zealand Trade and Enterprise
Aware Group is considered a leader in AI focused solutions in New Zealand. Despite being a young start-up company (established in 2016) the team have established themselves as a integral partner to Microsoft in Asia Pacific and are running 70+ workshops to Microsoft customers (in AsiaPac) on AI. This has led them into hypergrowth mode and have been rapidly acquiring enterprise customers for the their solution which is leading to very impressive revenue growth. The team are young, driven, coachable and very knowledgeable in their respective fields of expertise.

Aware is also seeking to open an AI Innovation Centre in NZ where it will be attracting up to 60 schools p.a. to visit and interact in this centre to increase the understanding of AI and its possibilities. We believe this adds a strong social element to the company which adds to their overall nomination weighting.